Paris, France | In August 1944 ordinary Parisians rose up, led by resistance fighters supported by workers, women and even priests to throw off the Nazi yoke after four years.

Following six days of street clashes, random attacks and armed barricades, they were joined by French and US soldiers and victory was confirmed.

The landing of tens of thousands of American, British and Canadian troops on the beaches of Normandy on June 6 launched the final pushback against Adolf Hitler's forces.

After being bogged down in Normandy for weeks, the Allies were finally able to advance eastwards, taking Orleans and Chartres, south of Paris, on August 17.

They planned to head straight for the German border without a detour to the capital where there was a risk of difficult and damaging urban warfare.

American General Omar Bradley wrote in his memoirs that Paris was "nothing more than an ink spot on our maps to be bypassed as we headed toward the Rhine."

But Parisians were impatient. Defying calls from the French government-in-exile headed by de Gaulle for them to hold on a bit longer, the Resistance sprang into action.

On August 18, French Forces of the Interior (FFI) communist chief Henri Rol-Tanguy gave the order for a general uprising.

The faction behind de Gaulle issued the same call the following day.

It was the start of a week of anarchy.

On August 19, trains and metros ground to a halt in a general strike.

Around 3,000 policemen, already on strike, occupied their headquarters, re-hoisting the French tricolour. Fighting there over the following days claimed the lives of nearly 170 policemen.

About 16,000 German soldiers and 80 tanks were in the city under the command of General Dietrich von Choltitz, who was holed up at the central Hotel Meurice.

The Swedish consul general, Raoul Nordling, managed to convince von Choltitz to accept a 45-minute ceasefire on August 19 and again the following day.

It enabled the Resistance to organise.

From August 22 barricades started going up, made out of burned-out vehicles, manhole covers and even Paris' infamous street urinals.

"In 36 hours there were 600 or more," another Resistance leader, Maurice Kriegel-Valrimont, told AFP in 2004.

"Some of the barricades were real masterpieces, built by craftsmen and strong enough to stop a tank. Others would have just collapsed, but the Germans didn't know which was which," he recalled.

On August 22, the overall Allied commander, US General Dwight. D. Eisenhower, was persuaded that French troops needed to go to Paris.

The following day French commander General Philippe Leclerc and his 2nd Armoured Division were en route, backed by the US Fourth Infantry Division.

The first French armoured tanks penetrated the city on the evening of August 24, reaching city hall around 9:00 pm.

"The French are arriving! They are here!" Parisians exclaimed, as related in AFP reports of the historic events.

Three more columns arrived the next morning, flanked by Resistance fighters on bicycles, with Leclerc making his official entrance at 9:45 am.

By midday on August 25 the French flag had been raised over the Eiffel Tower, replacing the Swastika after more than 1,500 days.

German soldiers, haggard and terrified, emerged from their hideouts, hands on their heads, insulted, spat on and in some cases assaulted.

At the Meurice, von Choltitz -- who famously disobeyed Hitler's orders to blow up the capital's monuments and bridges -- surrendered a little after 2:30 pm.

On the French side, the losses were minimal for an operation of its size: about 1,000 Resistance fighters, 600 civilians and 156 French soldiers.

De Gaulle arrived in the afternoon, heading to the city hall for his famous speech.

On August 26, he marched down the Champs-Elysees with Leclerc and the liberation forces, roared on by a million people.

It took another nine months before Germany's final surrender, ending World War II in Europe in May 1945. 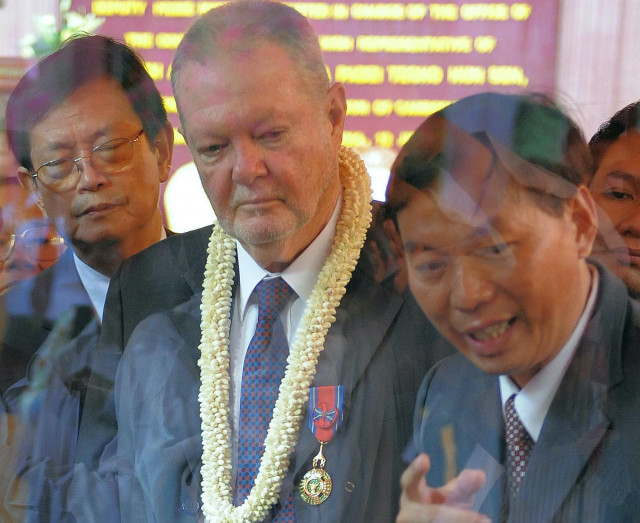