PHNOM PENH--An art exhibition held in Phnom Penh features the work of a Battambang Province artist inspired by the harsh years he lived through as an illegal fishing-boat worker in the Gulf of Thailand. His goal: to encourage Cambodians like him never to give up hope in life, he said.

Van Chhovorn’s 20 paintings and 12 sculptures, which are exhibited at the Pi-Pet-Pi Gallery282 under the theme “Odyssey I,” reflex his life on a boat off the coast of Thailand in the early 2000s—a period that lasted two years and five months, he said.

Chhovorn, who was born in 1982 in Ek Phnom District in Battambang Province, grew up in a poor family. His father was a soldier who died in 1984 due to a mine explosion. His mother later remarried but her second husband went missing while he was working as a fisherman in Thailand.

As the oldest child in the family and with no proper education, Chhovorn was compelled to find any work he could to help feed his mother, three younger siblings and grandparents, he said. This led him to work illegally in Thailand, having found a job through a broker.

Chhovorn was 19 years old at the time. “I didn’t finish school and I could not find a good-paying job,” he said. “I worked as a construction worker, but I was paid very little and the money was not enough for our daily meal. So, I decided to get a job abroad.”

This soon turned into a nightmare.

“I only heard stories of the Khmer Rouge time from my mother and my grandmother but working on the boat was like living in the Khmer Rouge regime,” Chhovorn said. “It was hell. I saw people killing each other every day over small issues like borrowing money. On the boat, we were forced to work from 8 p.m. at night to 2 p.m. in the afternoon the following day [18-hour shifts], never getting enough sleep. If we could not do our work, we were not allowed to eat.”

Chhovorn had been promised 3,000 baht or roughly $90 to $100 per month. But after two years and five months of work, he was only paid 6,000 baht, about $180 to $200, he said. Running away was the only solution to escape this nightmare of a place, he said. But this was not easy to do as workers could get killed or be sold to another boat if they were caught trying to leave.

“They were cruel to us: They said they had ‘bought’ us from brokers,” Chhovorn said. “The fishing boat was a dangerous place as people did not have principles and sympathy. They would kill each other when they were furious. As I was determined to come here to earn money and then return home, I tried to be calm and kind.”

On a boat, there would be 10 or 12 Cambodian workers, five or six Thai workers, and the boss had guns and swords, Chhovorn said.

After four months on a boat, Chhovorn met a man from Kampong Cham Province with whom he became friend. The man had asked him to help keep the $67 or so he had managed to save. But then, the man was brutally killed in a small quarrel at a karaoke place.

“I was in deep sorrow when he was killed because I kept remembering what he always told me,” Chhovorn said. “He had said ‘brother, we will return home together. Even though we don’t have money, as long as we can see our families.’

“I had warned him not to go to the karaoke place, but he said he was happy as he would be able to go home soon. So I just let him go. And I went back to sleep on the boat. They killed people like they squashed ants.”


Making his escape and finding his passion for drawing

Chhovorn worked off the coast of Pattani Province, home to Thai Muslim people of Malay ancestry. An area where violence escalated in the early 2000s, it could even be dangerous for other Thai people or authorities to enter the province, Chhovorn said.

Still, there was a local chief of police who worked on sending illegal migrant workers to their home countries. So one day, Chhovorn decided to risk it. “When the boat docked, I lied to my boss and said I had to go home to see my family but only for two weeks,” he said. “I then gave 3,000 baht [around $100] out of my 6,000 baht [$200] to the sheriff, asking him to help facilitate my return to Cambodia.”

So Chhovorn came back to Cambodia in 2002 and went to work as a plantation guard on a farm near the Thai border. In his free time, he would draw as he had discovered that, oddly enough, he really liked to draw.

Then, a friend at the plantation told him he should study drawing and make it a skill. So Chhovorn left the farm, went to Battambang City and enrolled in the arts program at the NGO Phare Ponleu Selpak, which offers free training to poor students in visual arts as well as in music, theater, dance and circus arts.

Chhovorn studied at Phare from 2006 through 2012. “I didn’t want to be a guard on a farm my whole life,” he said. “I didn’t know that my father had also been drawing until I joined Phare and my mother told me about it. She said she did not want me to be sketching or become an artist like my father because she thought that those skills were useless.

“When I heard [about my father], I was prompted to be an artist,” Chhovorn said.

While studying at Phare, Chhovorn worked as a waiter in the evening, and collected trash to sell during the night in order to support his family.

After leaving Phare Ponleu Selpak, he moved to Ratanakiri Province where he worked as a sculptor for four years. He then returned to Battambang City and got married. He now farms and does wood sculptures for a living.

Van Chhovorn said he had hoped to have his work exhibited ever since he was a student at Phare where he had been inspired by an artist who had had a similar life experience as his own in Thailand. However, Chhovorn had been afraid that people would call him a copycat if he created artworks about this as well. Until one day when he was told that the life of each person is somehow the same but different.

“So, I thought that I would create artworks about my life in Thailand to show people that illegal migration is risky,” Chhovorn said. “I produced this work as a message to those who want to seek jobs outside the country. I want to remind them to really look into it before deciding to go. Working in our country is way better, although the pay may be lower, as we at least can live with and see our families.”

The exhibition at the Pi-Pet-Pi Gallery282 features 20 paintings and 12 sculptures among which two sculptures will be exhibited at the National Museum in Phnom Penh on Nov. 22, 2021.

“I feel happy: This is my first exhibition,” Chhovorn said. “This is my dream since leaving Phare. I really wanted to exhibit my work at least once before I died.”

The artwork that means the most to him is the one that depicts himself with buffalo horns on his head: It is about the time Chhovorn was able to save his enemy's life and change his mindset.

“One worker on the boat, who was furious with me when I told him not to insult my mother, wanted to kill me with a knife,” Chhovorn said. “But when he was running toward me, he tripped and was about to fall on the knife, but I pulled him back. He then apologized to me and said he was wrong. I was so happy that time.”

The buffalo sculpture speaks of his boss who forced the workers on the boat to work regardless of their well-being. “When I asked for medicine, the boss said he bought me to work, not to be sick,” Chhovorn said. “So, I had to work while being sick. They saw us, the workers, as buffaloes working nonstop and without being given any value.”

When asked what has prompted him to keep on creating artworks besides being passionate about it, Chhovorn said that he wants Cambodians in his community as well as throughout the country to appreciate arts and artists as they are often overlooked and believed to be useless.

“My parents-in-law said that my work was useless and urged me to find a job in Thailand or in a factory,” Chhovorn said. “Some Cambodian don’t really value artists, so I think I have to break through this barrier and switch their beliefs.”

As for him, Chhovorn said he will be an artist until he cannot draw or make sculptures anymore. His dream is to have his own place where he can exhibit his work and display ancient Khmer tools, which may soon be lost to the country, when he reaches old age.

His message to younger people who love various artforms is to pursue their passion and not lose hope as long as the sun still rises. “Don’t give up if you love that work,” he said. “Even if you cannot perform it 100 percent perfect, you can at least do it 70 or 80 percent.”

The Van Chhovorn exhibition “Odyssey I” at the Pi-Pet-Pi Gallery282 runs through Dec. 17. 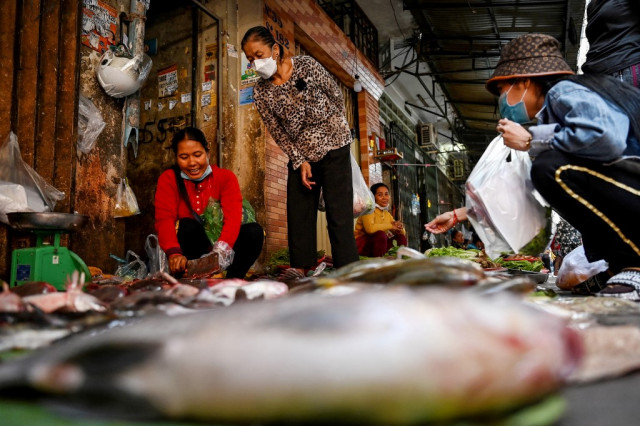