Australian Ambassador announces the launch of FishTech in Cambodia

Kampong Thom Province -- The Australian Government, in partnership with the Cambodian Government, is investing in technology to protect fish, boost river health and increase climate resilience in Cambodia.

The launching ceremony of the "Cambodia FishTech Launch Event”, with the assistance of the Australian Government, was held at Stung Chinit Fish Ladder in Snor Village, Kampong Thmor Commune, Santuk District, Kampong Thom Province on Sept. 1. An aerial view of the "fish ladder" in Snor village, Kampong Thmor commune, Santuk district, Kampong Thom province, which was completed in 2006. This fish ladder was designed by Ben Anderson Barrage, based on the Burnett River in Queenland, Australia. Photo: Chhut Touch

The Australian Ambassador to the Kingdom of Cambodia, Pablo Kang, has announced the launch of the FishTech Project with the participation of Professor Andrew Campbell, Executive Director of the Australian Center for International Agricultural Research. (ACIAR), Prem Ratha, Deputy Governor of Kampong Thom Province, Khuth Savoeun, Secretary of State of the Ministry of Agriculture, Forestry and Fisheries, and Pum Sotha, Delegation of Royal Government of Cambodia in charge of Fisheries Administration.

“The management and protection of water and related resources is becoming increasingly important in the region with rapid economic development, population growth, and climate change,” said Pablo Kang. Fisheries are key to the food security of the Cambodian people, as well as providing employment and livelihood benefits to an estimated two million Cambodians.

Australia is partnering with the Cambodian government to protect fish and improve river quality as well as climate resilience through the Fish Tech project, Kang added. The FishTech project will facilitate fish trails or "fish ladders" to support the movement of fish in irrigation systems and dams, which will also lead to stronger biodiversity production and local income generation.

Following the launch, the FishTech project will be managed by the Australian Center for International Agricultural Research (ACIAR), led by Professor Lee Baumgartner from Charles Sturt University in Australia. 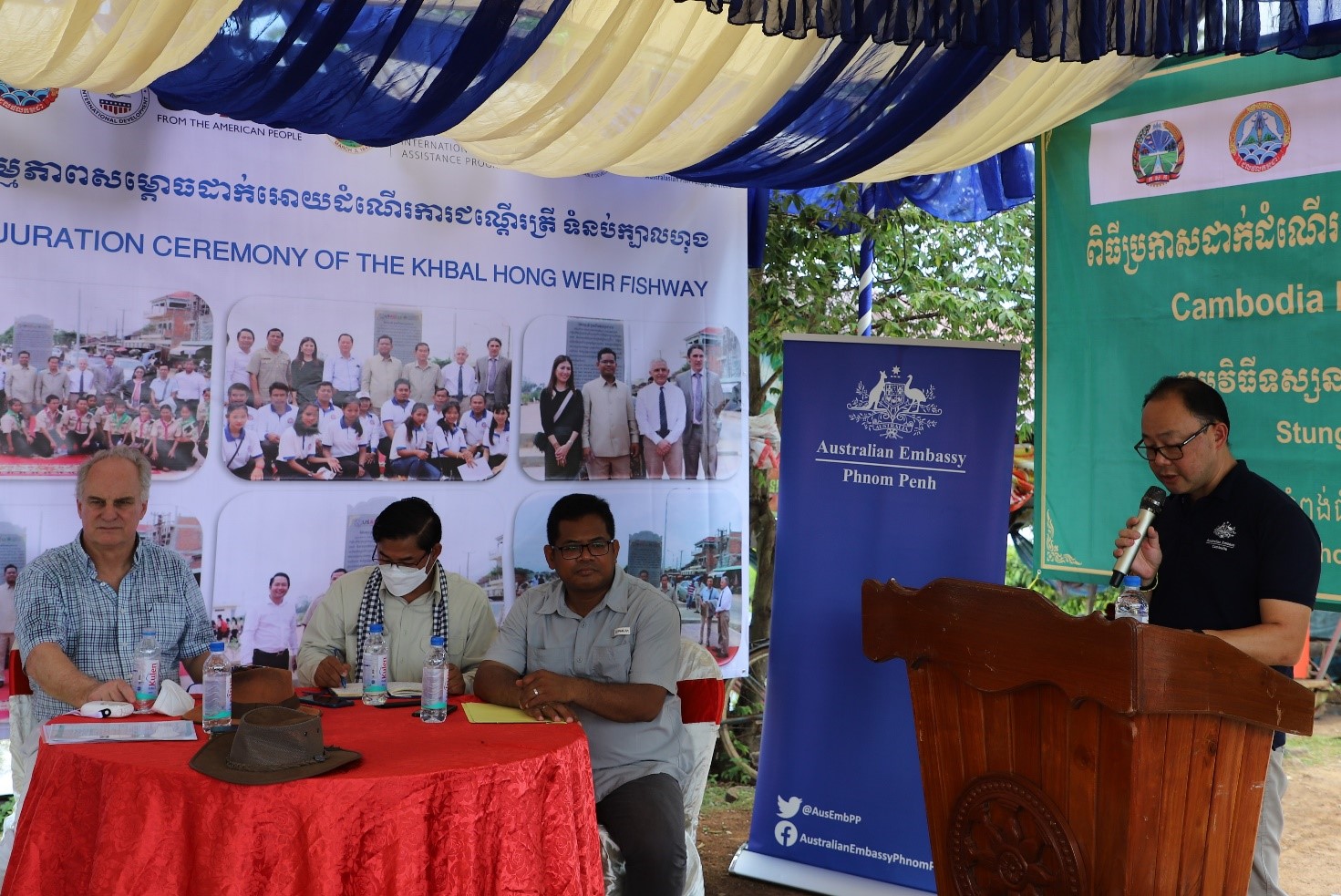 “Fish is a source of 60% of all the protein that people living along the Mekong River get,” said Professor Campbell. Normally, Mekong fish migrate to the upper reaches of the Mekong River in the dry season for spawning and migrate back to the floodplains, especially into the Tonle Sap Lake to replenish their life cycle. The construction of structures such as irrigation or hydropower dams has blocked fish migration routes both upstream and downstream, posing a threat to food security in the area. The grant is a clear example of the Australian Government working with partners across the countries to provide innovative technologies to protect fish species and improve river quality across the Mekong Basin.

Previous research funded by ACIAR has shown that when we build good fish passage, it reduces the impact of irrigation development on fish migration and provides benefits to the economy and society of the Mekong-dependent communities for a long time.

Through the Mekong-Australia Partnership, Australia will provide a total of AUS 5 million over three years (2022-2025) for the FishTech project. Most of the activities in this project are carried out in Cambodia and Laos, with the participation of Vietnam and Thailand in various training courses.