Having snatched the victory from lame-duck President Donald Trump, Joe Biden who has a Irish heritage is ready to enter the White House once again after 4 years. With this historical victory, Joe Biden would have been bowed and worshiped as a divine leader by his American fellows if he were the supreme leader of North Korea.

To be the second person to none and the most powerful man on the planet, Biden has delivered series of strong and convincing political messages to bolster the confidence of his 80 million supporters and to calm Trump’s 74 million supporters.

One of the latest messages from Joe Biden is "American is back" delivered when he introduced his six key figures in the upcoming Biden Administration. “America is back” is not exactly different in meaning from “Make America Great Again”  resonantly chanted by Trump, his supporters and previous American presidents and politicians including Alexander Wiley used in 1940, Barry Goldwater used in 1964,  Ronald Reagan used in 1980, Bill Clinton used in 1992. The phrases may signify the same meaning, but many see that challenging burdens will put the Biden administration to the test in six weeks or so.

The US healthcare system has been in bad shape long before the pandemic hit the system. The evidence pointed out each year that 30,000 people had died before seeing doctors and 87 million people were uninsured. American healthcare is one with the highest costs in the world. The Peter G. Peterson Foundation reported that on average it cost $11,000 per person in 2018 and it is projected to cost $18,000 per person by 2028. The high cost of healthcare forced half a million families to declare bankruptcy when 1 in 5 Americans could not afford medical prescription.

It is understood that Trump’s predecessor Barack Obama had tried to reinvigorate the healthcare system by introducing affordable healthcare bills beneficial to lower-income households and adults. However, the aging population and rising healthcare prices have attenuated earnest effort.

The US healthcare system has been unprecedentedly hit hard by the COVID-19 pandemic that claimed 268,914 lives with 5,064,463 active cases and nearly 200,000 infected cases daily as of Nov. 26. The Hardest hit allows us free rein on diverting from our previous notion of the US healthcare system’s nonstop readiness to respond to any fierce pandemic.

Therefore, one of the dominant burdens of Biden is to reform or formulate health policy and plans to revitalize the pandemic-triggered peaked healthcare system and to at once look for a COVID-19 vaccine. To strengthen its role in promoting humanitarian principles, there is a need to build the effort within the upcoming Biden administration to conclude the de-politicization of the COVID-19 vaccine and its therapeutics.  Failure to solve the public health crisis as part of de-politicization of the vaccine may not only ruin domestic confidence but also stain American leadership abroad.

Solving the Social Problem at Home

America is known as the land of opportunity. However, one should not forget that America is also a diverse human society, and thus, cannot escape from social problems. According to a report published in September 2019 by the Pew Research Center, the United States faces  11 chronic major social problems.  The same study pointed out that two-thirds of Americans see the affordability of healthcare as the biggest problem besides college education costs, the federal budget deficit, climate change, economic inequality, rising hatred crimes, etc. The drug addiction and overdosing alone killed 700,000 Americans during 1999-2017 and costs the US economy between $600 billion and $874 billion in societal harm every year. These threats become complex and urgent, and require breakthrough social remedies forthwith.

Politically, a sense of authoritarianism is growing in American politics remarkably leading to the great erosion of public confidence in democracy. Joe Biden has acknowledged and penned some serious issues such as hyper-partisanship and corruption in his article before the election campaign. The unprecedented protest regarding the Nov. 3rd presidential election by Trump has alarmed the United States with political unrest that almost escalated into violence.

From an economic aspect, the United States is facing huge income inequality when the highest-earning 20% of the families made 52% of all US income in 2018. One should not forget that history has already given evidence of social inequality that led to social and political unrest in some fragile societies around the globe. More importantly, that not so long ago, inequality was the biggest single risk to the world in 2014. Thus, the Biden administration will bear the burden to narrow down the inequality gap. The United States needs to realize this dream with others by helping them to realize their dreams as well.

US politics is led by exceptional nationalism where the majority of Americans think the United States is the best on Earth. Nationalist behaviors as such power Americans to think America must be first, America must be looked up to and America must lead. Surprisingly, for the past four years, the Trump administration has undermined the United States' global leadership role by withdrawing its membership from at least five important international agreements including the Paris Climate Agreement, Trans-Pacific Partnership, UNESCO, Iran Nuclear Deal, UN Human Rights Council. Massive withdrawals became the nostrum of Trump to heal American leadership guided by his motto “Make America great again.” American politicians including Joe Biden himself consider that the withdrawals have hobbled and undermined the wellspring of American global leadership. Taking Trump’s withdrawal from WHO that will come into effect in July 2021, many analysts viewed that “America’s move marks the “end of an era of United States global health leadership.” The US leadership image has taken a major hit on several fronts due to such withdrawals and exceptional behaviorism, allowing analysists to think multilateralism has been at a low point since Trump took office.

Furthermore, Trump’s unpopular trade war with China has spilled its effects on both the United States’ friends and enemies, making them confused and uncomfortable. Especially when Trump advanced this war by promoting the America First policy—protectionism and unilateralism that impaired multilateralism spirit. It was clear that Trump’s attempt was to navigate the adverse effect of trade war into economic gain even though many critics argued that the United States loses more than China does.

To ease the extreme exceptionalism, the United States needs to promote multilateralism by re-signing the withdrawn agreements, easing immigration policy, making sincere diplomatic relationships with their counterparts, and softening the political stands towards smaller countries. Being a member of these important agreements and friendly readjustments, the United States has so much to initiate to reinvigorate its global leadership.

As Joe Biden keeps chanting "America must lead again," the world is waiting to see how Biden will employ the power of constructive example to re-posit the United States as a brother number one again and become an orchestrator to revise the hard-earned American leadership that has fallen apart at the seams.

Taking all problems into consideration, Joe Biden at first will have to shrug off other burdens including employment rate, healthcare prices, racism, drug trafficking, income disparity, etc., as much as he can.

At the international level, there are two clashing analytical views on the discussed topic regarding whether Joe Biden may reverse Trump’s decision regarding the role of the United States. Some view that Joe Biden is most likely to bear the burden such as trade war and re-entry into important agreements. Any attempt to withdraw from trade war battlefields may escalate domestic outrage and protests, especially stemming from Republican Party’s senators as well as supporters, where Joe Biden is seen as never being ready to bow his head toward compatible superpower China but might be ready to lower his tone. However, Joe Biden might have to adopt another brand of friendlier, practical economic policy with China to mitigate the trade war’s effects on their friend nations. In this regard, the Biden administration should be aware that the United States’ dream and other nations’ dreams are closely connected and should be accommodated with one another. If other nations’ sound nights were disturbed, the United States would not realize its dreams. Also, with an equal status among countries, the United States needs to value other nations’ dreams and allow them to realize their goals: the dream of sustainable peace, political stability, sovereignty and non-interference.

Dr. Dom Vannak is an adjunct professor at the University of Cambodia. The opinions expressed are the author’s own and do not reflect the views of any institution. 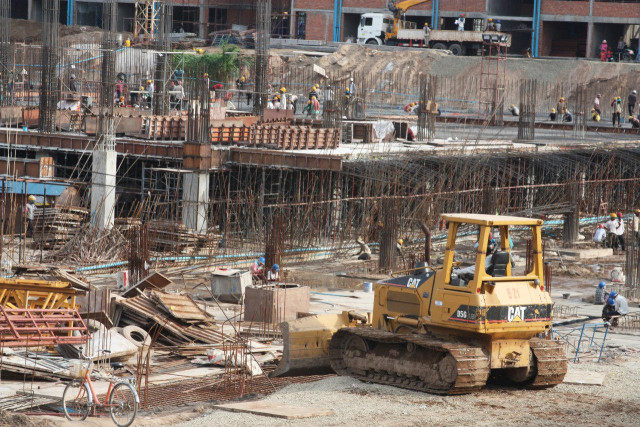