A woman rides her bicycle past graffiti along a street in Phnom Penh on July 2, 2020. (Photo: AFP)

"The amount of 564 million dollars has been allocated for health and social assistance and 600 million dollars for economic support through lending to small and medium enterprises," he said during a press conference.

Since the virus outbreak, the government has released 364 million dollars for economic and social supports, he said.

Vissoth said the stimulus package did not include tax breaks granted to affected companies, especially to those in garment and tourism industries.

Labor Ministry secretary of state Heng Sour said due to the pandemic, the Southeast Asian nation has experienced a decline in the exports of garment, footwear and travel goods in the first half of 2020.

He said the kingdom exported those products worth 3.78 billion dollars during the January-June period this year, down 5.4 percent over the same period last year.

"Due to the COVID-19 pandemic, the demand for garments has dropped globally, affecting not only Cambodia but also other producing countries such as Bangladesh and Vietnam," Sour said.

To date, 450 garment, footwear and travel goods factories in Cambodia have suspended operations, he said, adding that unemployed workers receive a stipend of 30 U.S. dollars from the factory and 40 dollars from the government per month.

The garment, footwear and travel goods industry is Cambodia's biggest export sector, employing about 750,000 people in approximately 1,100 factories and branches.

For the impact of the pandemic on tourism, Tourism Minister Thong Khon said early last month that nearly 3,000 tourism-related establishments such as hotels, guesthouses, restaurants, massage parlors, karaoke clubs, nightclubs and tour and travel companies had been either suspended or closed, affecting 45,405 workers.

Cambodia has recorded a total of 141 confirmed COVID-19 cases to date, with 131 patients cured and 10 remained hospitalized, according to the Ministry of Health. 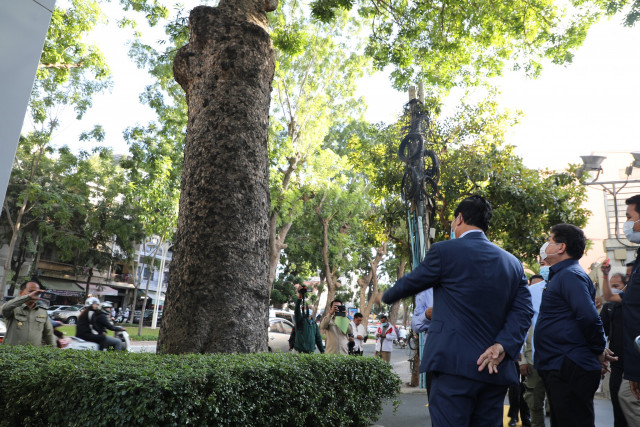