Efforts to remove fishing gear in the Mekong River over the last decade have helped their numbers grow.

SAMBOR, CAMBODIA--It’s 5:30 p.m., and several tourist boats linger in the middle of the Mekong River. A blood-orange sun casts a warm glow across the milky brown water, making it the ideal time to photograph the rare Irrawaddy river dolphins that congregate in deep, swirling pools. Not that these dolphins are particularly willing photo subjects, as the tourists on this day are finding out.

While marine dolphins often jump fully out of the water while swimming on a continuous path, the snub-nosed—and indisputably adorable—Irrawaddy dolphins, which grow to be up to eight feet long, will only partially breach the surface before diving back below. They may briefly pop up in one place only to reappear the next time in a random spot a few hundred feet away. The clicking of tourist cameras following each glimpse inevitably comes too late.

It’s an impressive disappearing act. Yet the most remarkable feat these dolphins have pulled off may be that they have not disappeared.

For decades, Cambodia’s Mekong River population of Irawaddy dolphins has verged on extinction. Once believed to have numbered in the thousands, the population began to plummet in the 1970s. During the violent reign of the Khmer Rouge and the years of war that followed, the dolphins were hunted for food. Indiscriminate net fishing, in which the dolphins sometimes end up as bycatch, took a further toll, and by the turn of the millennium, there were maybe fewer than 100 left.

Some conservation measures were finally implemented in the mid-2000s when the World Wildlife Fund (WWF) partnered with the Cambodian government to support law enforcement efforts combating unsustainable fishing practices, which include using poisons and dynamite. Around this time, the Cambodian government also began promoting the dolphins as a flagship species and tourist attraction. Yet it takes time to crack down on illegal activity, and in 2015, a population census showed only 80 individuals remaining.

Then, last year, came some good news. A new survey found 92 dolphins in the Mekong River, the highest number in more than 20 years. Researchers identified nine newborn calves. This year, three more have already been found. Eng Chea San, the director general of the Cambodian Fisheries Administration, says there may be a dozen or more previously unidentified dolphins living in the river.

No one is celebrating just yet, though. The dolphin population remains well below what is considered safe to ensure its future survival. A wide array of threats persists, most notably the planned construction of a new 2,600-megawatt dam in Sambor, Cambodia, which would eat into core dolphin habitat. High mortality among young dolphins also continues to mystify scientists. (Read why Southeast Asia may be building too many dams too fast.)

But, says Mark Drew, a WWF program director in Cambodia, which has spearheaded the dolphin campaign, “We may have been able to bend the curve.” The WWF’s country director Teak Seng calls it “fabulous news,” but adds that there is no time for complacency. “As threats to their survival persist, we need to redouble our efforts to protect the dolphins both for their future and that of the river and communities that live alongside it,” he says.

Less famous than their ocean-dwelling cousins, river dolphins are among the most endangered creatures on Earth. In 2007, the Yangtze River dolphin, or bajji, became the first mammal to go extinct in more than 50 years and the first cetacean species ever driven to extinction by human activity, according to a Royal Society study.

The Irrawaddy dolphins, which, with their bulging foreheads resemble small beluga whales, live in brackish water near coasts, river mouths, and in estuaries in southern Asia. But three freshwater subpopulations have been established in three rivers, including the Mahakam River in Indonesia, the Ayeyarwady (or Irrawaddy) River in Myanmar, and the Mekong, which originates in the Tibetan highlands and runs through six Asian countries before emptying into the South China Sea. (Read about how “electro-fishing” in Myanmar puts river dolphins at risk.)

The Mekong population, believed to be the largest of the three, occurs here in northern Cambodia. It’s an area that, like most of Cambodia, has experienced intense fishing pressure for decades. The biggest problem for the dolphins has been entanglement in gill nets, causing them to drown.

In 2012, the Cambodian government declared the entire stretch of the river a protected zone, with fishing prohibited at all times in core dolphin habitat. Today, the rules are enforced by a contingent of 32 river guards, and officials say overall dolphin mortality has gone down significantly. “It is no doubt because of the conservation efforts that we are seeing more dolphins,” says Eam Sam Un, a biodiversity and monitoring manager for the WWF. (Read more: Can the Mekong river basin be saved?)

Greater involvement from local communities has also helped, conservationists say. Revered in both Cambodia and Laos, where many people believe the animals are reincarnations of their ancestors, the Irrawaddy dolphins have become a focus of Cambodia’s burgeoning ecotourism sector, which supports the conservation work.

The attention given to the dolphins also has positive spillover benefits for other wildlife in the ecologically troubled Mekong region, says Zeb Hogan, a fish biologist at the University of Nevada in Reno, who leads a USAID research project called Wonders of the Mekong. “The dolphin is a flagship species, it’s well known in the area, highly visible and attracts national and international conservation interest and funding,” he says. “The protection of dolphins helps to protect the habitat of other wildlife in the area, including endangered turtles and large-bodied fish.”

Researchers still have much to learn about the behavior and ecology of the Irrawaddy dolphins, says Lindsay Porter, a dolphin expert who traveled to Cambodia and works with the Hong Kong-based Sea Mammal Research Unit connected to the UK’s University of St. Andrews.

“We don’t really know why the dolphins congregate in these pools, some of which can be 150 feet deep,” says Porter. “It could be because of the availability of food there or possibly because there is less disturbance.”

Researchers are trying to keep track of all individuals in the population, which is no easy task. The only way to differentiate between individuals is by their small dorsal fins, which have slightly different shapes. The fact that the animals only pop up for very short moments and don’t bring their bodies out of the water make them incredibly difficult to photograph for identification purposes.

“It means you’re going to spend a lot of hours on the water,” says Porter, who is involved in a project to update the detailed catalogue of individual dolphins that officials maintain. Porter and other researchers are also planning to study the dolphins’ sophisticated use of whistling as a means of communication.

Teak, the WWF director, is optimistic about the animals’ future. “The Irrawaddy dolphin is Cambodia’s living national treasures and key indicators of the health of the Mekong River,” he says. “Their recovery is a hopeful sign for the river and the millions of people who depend on it. After years of hard work, we finally have reason to believe that these iconic dolphins can be protected against extinction.”

This story was originally published on National Geographic 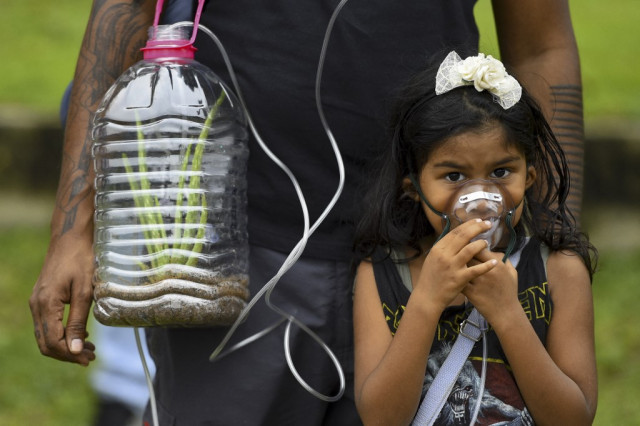 Climate activists look to 2021 to rebound from pandemic