China's President Xi Jinping speaks following his arrival via high-speed rail across the border in Hong Kong on June 30, 2022, for celebrations marking the 25th anniversary of the city's handover from Britain to China. Photo by Selim CHTAYTI / POOL / AFP

Hong Kong, China - - Chinese President Xi Jinping said Hong Kong had been "reborn of fire" as he arrived Thursday to mark the 25th anniversary of the city's handover, in his first visit since the business hub's democracy movement was crushed.

Xi's trip is a chance for the Chinese Communist Party to showcase its control after huge protests engulfed the city in 2019, prompting Beijing to impose a harsh crackdown.

"In the past period, Hong Kong has experienced more than one serious test, and overcome more than one risk and challenge," Xi said after arriving at a high-speed train station in the heart of the city.

"After the storms, Hong Kong has been reborn of fire and emerged with robust vitality."

Friday's anniversary also marks the halfway point of the 50-year governance model agreed by Britain and China under which the city would keep some autonomy and freedoms.

Critics say a national security law imposed by Beijing after the 2019 protests has eviscerated those promised freedoms.

But Xi said Thursday "the facts have proved that One Country, Two Systems has great vitality".

"It can guarantee long-term stability and prosperity in Hong Kong, and defend the well-being of Hong Kong people," he added.

Xi's visit is the first time he has left mainland China since the Covid-19 pandemic began.

Accompanied by his wife Peng Liyuan and Foreign Minister Wang Yi, he was greeted at the station by schoolchildren waving flags and bouquets of flowers, as well as lion dancers and select accredited media.

Details around the trip have been kept tightly under wraps, and the visit has sparked a massive security effort.

Government leaders have been forced into an anti-Covid "closed-loop" system, parts of the city shut down, and multiple journalists barred from Friday's events.

The Chinese leader will likely spend the night in neighbouring Shenzhen on the mainland.

Those coming into Xi's orbit during the trip, including the highest-ranking government officials, have been made to limit their social contacts, take daily PCR tests and check into a quarantine hotel in the days leading up to the visit.

"To play safe, if we are going to meet the paramount leader and other leaders in close quarters, I think it is worthwhile to go into the closed-loop arrangements," veteran pro-Beijing politician Regina Ip told AFP.

Authorities have moved to eliminate any potential source of embarrassment during Xi's time in the city, with national security police making at least nine arrests over the past week.

The League of Social Democrats (LSD), one of Hong Kong's few remaining opposition groups, said it will not demonstrate on July 1 after national security officers spoke with volunteers associated with the group.

LSD leaders told AFP their homes had been searched, and that they had also had conversations with the police.

Chan Po-ying, the group's president, said that over the last few days she had begun to feel that she was being followed and watched.

"In the past there was something like this too, but not as bad as this year," the veteran activist said.

Hong Kong's top polling group announced that it would delay publishing the results of a survey that gauged government popularity "in response to suggestions from relevant government departments after their risk assessment".

The July 1 handover anniversary in Hong Kong has traditionally been marked by tens of thousands taking to the streets in peaceful rallies every year.

But mass gatherings have essentially disappeared in Hong Kong over the past few years under a mixture of coronavirus restrictions and a security crackdown aimed at eliminating any public opposition to China's uncompromising rule over the city.

There are large-scale road closures on Hong Kong Island, and the flying of drones has been temporarily banned throughout the entire city, with police citing security concerns.

Select sites across the financial hub have also been closed off, including the high-speed rail terminus, a performance venue for Chinese opera and Hong Kong's Science Park.

A number of Science Park workers told AFP they had not received any notification about a visit by Xi but said they were told to work from home on Thursday.

At a high-end shopping mall next to the rail terminus where Xi arrived, a handful of spectators gathered near the edge of a glass facade but their view was completely blocked.

In the ice-skating rink behind them, dozens of people were doing laps, oblivious to the Chinese leader's arrival.

A housewife in her 40s surnamed Luk told AFP she was taking a look out of curiosity as her child was busy ice-skating.

"These couple of years, because of the pandemic, there's not much of a festive atmosphere. Hopefully this (visit) can cheer everyone up, as it is something happy." 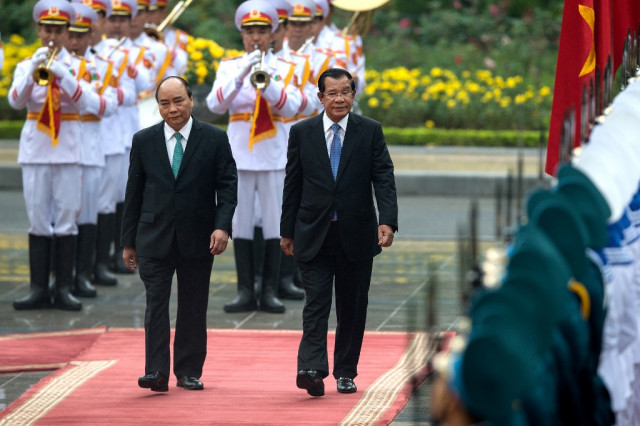