SIEM REAP - In many villages and districts of the Angkor Archaeological Park, working as a blacksmith is still a popular choice among Cambodian people.

The tradition of crafting everyday objects varies from one location to another in the country. And one of the interesting points about this is that the names given to those objects may vary depending on where they are made.

For example, blacksmiths and villagers working and living in the Angkor area usually call p’keak a particularly large traditional knife, which is quite similar to a machete.

This traditional heavy-duty tool is characterized by a blade of forged iron and a handle made of a slightly-curved piece of bamboo plant that is intertwined with metal straps and has a small wedge inserted to further tighten up the iron blade to the bamboo handle.

It should be noted that people in the Angkor area use a p’keak for their everyday activities such as clearing the forest or cutting small bushes around their houses or on their farmland. 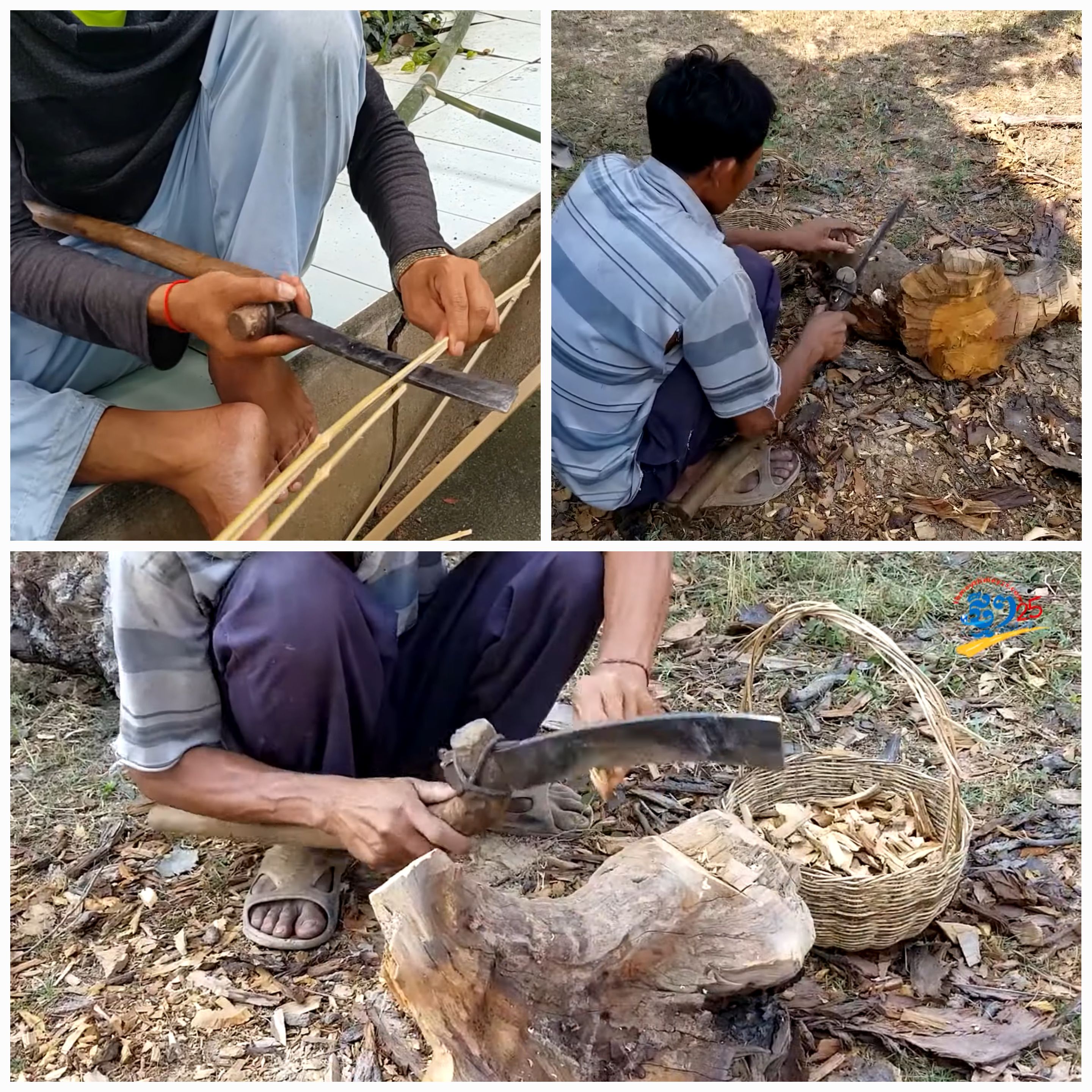 If we take a look at the scenes on the bas-reliefs of several temples in Siem Reap Province, and especially those of Angkor Wat and the Bayon temples, one of the military weapons depicted as being used those hundreds of years ago closely resembles today’s p’keak. And centuries later, the tradition and knowledge of how to make use of this ancient piece of equipment still seems to be vividly clear in the mind of the people in this part of the country.

Knowledge as to how to craft this tool is being passed on from one generation to the next. “I learned it from my uncle,” said Sun Vun. He began his apprenticeship in 1981, but it is only in 1993, when peace returned to the country, that he started to make a living out of this craft, he said.

The process involves two major parts: the bamboo handle and the metal blade, Vun explained. If the bamboo required for knife handles can be found ahead of time, the forging process for the metal blades is not that time-consuming, he said, as he can forge as many as four to five blades in one day.

A craft that became a lifelong profession

Sun Vun works along with Chhoun Sok, who has been a blacksmith for more than 20 years, in Ta Tray village, which is located in Banteay Srey district’s Preah Dak commune in Siem Reap province.

One of the most difficult tasks in the making of this tool is finding good bamboo for the handle, Vun said. Ideally, the bamboo should be thick, solid and old enough, he explained. It should also have a curve at one end to easily handle the metal blade.

Blacksmiths either go themselves in the forest to find the bamboo or buy it from vendors in their area. Family who frequently use this tool tend to collect bamboo sticks of the appropriate shape whenever they are on their farmlands or go in the forest.

Since it is difficult to find suitable bamboo sticks for knives’ handles, it is not rare to see in blacksmiths’ shops bamboo sticks being bent to the required shape and dimension. The sticks must also be cleaned and drilled at the curvy end to accommodate the metal blade later in the process.

When forging blades, the dimensions—thick or thin, long or short—can be determined based on customers’ preferences, making the price differ from one knife to the next. The metal blade is slightly bent with a small crook at one end so that there can be a good grip between the straps and the blade.

Those straps are small steel rings made according to the size of the bamboo handle and put on top of each other in a criss-cross fashion to protect the blade from flying off its handle when used and to prevent the bamboo handle from breaking into pieces. Blacksmiths make the straps by hammering metal rods into ring shape. Once made, the rings are forged to seal the gap between blade and handle. Sand can also be used to increase the temperature to better heat up the rings. The process, which takes one to two minutes, is done twice to assure the quality of the seal.

Before attaching the blade to the bamboo handle with the help of the straps, blacksmiths use a flat tool called “leat.” Blacksmiths insert the leat into the drilled hole to position the straps with more precision. The blade can later on be inserted without moving the straps.

Lastly, a wedge must be shaped pointy at one end and less so at the other end. The blade along with the wedge are inserted into the drilled hole on the already strapped bamboo stick. The straps are then tightened one last time to ensure a perfect fit.

And this is how a p’keak is made by a master artisan of the 21th century according to a tradition that goes back hundreds of years.


Originally written in Khmer for ThmeyThmey25, this story was translated by Cheng Ousa for Cambodianess. 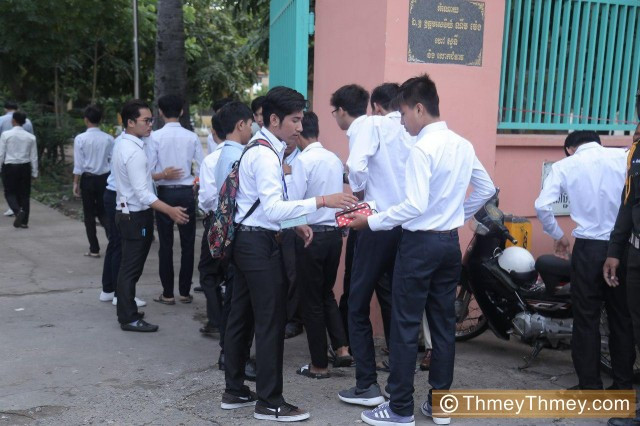 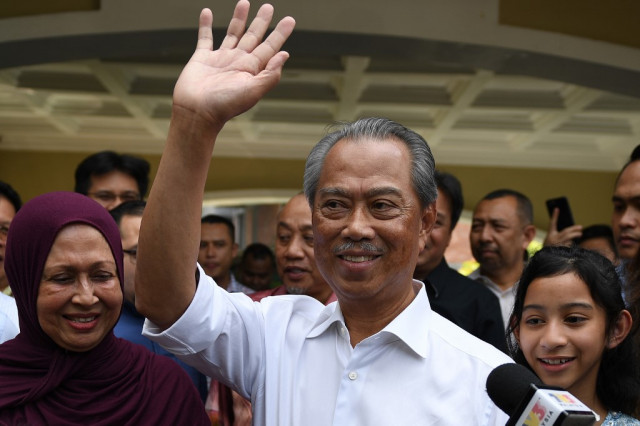 New Malaysia PM sworn in amid crisis, Mahathir fights on 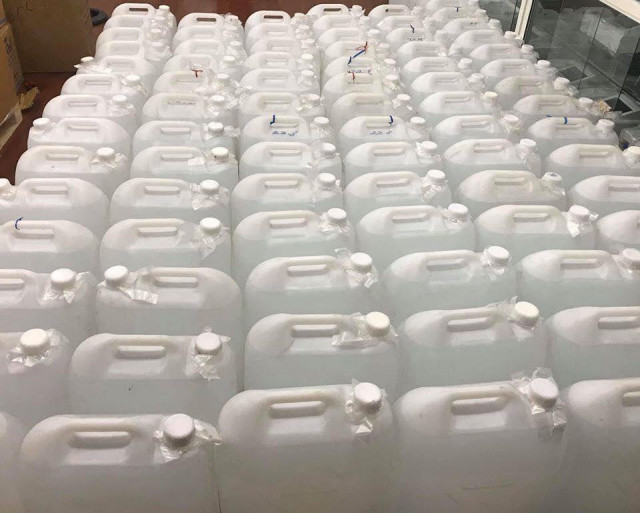