Ballots bearing the name of the finalists are displayed for the second round of France's presidential election at a polling station in Paris, on April 24, 2022. (Photo by STEPHANE DE SAKUTIN / AFP)

Paris, France -- French voters began casting their ballots Sunday for the presidential run-off between centrist incumbent Emmanuel Macron and his challenger Marine Le Pen, after a fractious campaign that has seen the far right come its closest yet to winning power.

Macron went into the election with a stable lead in opinion polls, an advantage he consolidated in the frenetic final days of campaigning, including a no-holds-barred performance in the pre-election debate.

But analysts have cautioned that Macron, who rose to power in 2017 aged 39 as the country's youngest-ever modern leader, can take nothing for granted given forecasts of low turnout that could sway the result in either direction.

He must above all hope that left-wing voters who backed other candidates in the first round on April 10 will back the former investment banker and his pro-business, reformist agenda to stop Le Pen and her populist programme.

Voting stations will close at 8:00 pm (1800 GMT), when preliminary results will be released that usually predict the final result with a high degree of accuracy.

Some 48.7 million French are eligible to vote.

The first vote in the election was cast midday on Saturday, Paris time, by a 90-year-old man in the tiny island territory of Saint Pierre and Miquelon, off the northern coast of Canada.

Polls subsequently opened in France's islands in the Caribbean and the South American territory of French Guiana, followed by territories in the Pacific and then the Indian Ocean.

Macron himself repeatedly made clear that the complacency of stay-at-home voters precipitated the shocks of the 2016 elections that led to Brexit in Britain and Donald Trump's election in the United States.

Analysts say abstention rates could reach 26 to 28 percent, though the 1969 record for a second-round abstention rate of 31.1 percent is not expected to be beaten.

Far-left leader Jean-Luc Melenchon, who scored a close third-place finish in the first-round vote, has pointedly refused to urge his millions of followers to back Macron while insisting they should not vote for Le Pen.

Another factor is that elections are being held in the midst of the Easter school break in much of France.

According to Martial Foucault, director of the CEVIPOF political studies centre, a high abstention rate will narrow the gap between Macron and Le Pen, describing this as a "real risk" for the president.

Early turnout indications will be closely watched from the overseas territories, where average incomes are lower than in mainland France and which generally backed Melenchon in the first round.

In New Caledonia, for example, turnout at midday was just 18.2 percent. In mainland France, the first turnout estimation will be published at 12:00 pm.

The stakes are huge for both France and Europe, with Macron pledging reform and tighter EU integration while Le Pen, who would be France's first female president, insists the bloc should be modified in what opponents describe as "Frexit" by another name.

Macron has also opposed Le Pen's plan to make it illegal to wear the Muslim headscarf in public, though her team has walked back on the proposal ahead of the vote, saying it was no longer a "priority."

They have also clashed on Russia, with Macron seeking to portray Le Pen as incapable of dealing with the invasion of Ukraine due to a loan her party took from a Russian-Czech bank.

Macron would be the first French president to win re-election in two decades since Jacques Chirac in 2002.

If elected, he is expected to address supporters on the Champ de Mars in central Paris at the foot of the Eiffel Tower

Polls have shown Macron with a lead of around 10 percentage points, a much closer outcome than in 2017, when the same two candidates faced off and Macron carried the day with 66 percent of the vote. 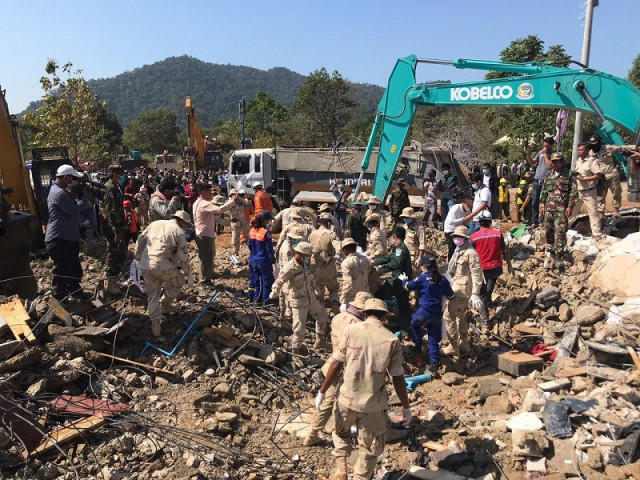 The Kampot Court Releases the Owners of the Kep Building Col...