A photo shows Chhay Visoth who is director of the National Museum of Cambodia during an interview with Thmey Thmey in early February.

Ky Soklim: The National Museum of Cambodia celebrated its 101st birthday on April 2, 2021, but recently the museum announced it would postpone the celebration of the anniversary until April 13 the same year. What is the reason behind this delay?

Chhay Visoth: According to the agenda from the Ministry of Culture and Fine Arts, we actually planned to conduct the 100 year anniversary in 2020. Due to the pandemic, in 2020, we had to delay this event several times. We then decided to set a new schedule for April 2. Unexpectedly, because of the Feb. 20 event [the latest community outbreak of COVID-19 in Cambodia], we have requested the concerned ministry to once again postpone the agenda. However, we are trying to organize this anniversary event of the museum through online platforms instead.

Ky Soklim: As the director of the National Museum, how do you plan to organize this exhibition online?

Chhay Visoth: We have not completely and thoroughly planned out the entire event. However, we are aiming to begin providing primary information in relation to the 101-year anniversary of the museum and the remembrance toward the activities which the museum have done for the last century. The exhibition will be broadcast live online and will focus on two main themes. The first one is to showcase some of the work which has been done since 1920 until the present period. The second one is to showcase some of the ancient sculptures within the museum. Yet, we will not showcase all of the sculptures due to limited time. We only pick around 40 sculptures for this event. We will be demonstrating the sculptures and their history, why they are here and where they originated from. We also want to show out renovation onto the Buddha sculpture gallery.

Ky Soklim: The live exhibition will be broadcast via the Facebook page of the Ministry of Culture and Fine Arts. However, may I know the time schedule of that event?

Chhay Visoth: We have not surely set the time schedule yet. Because the Khmer New Year is approaching, the concerned ministry has a lot of tasks on their plate. We are currently requesting the appropriate time from the Ministry of Culture and Fine Arts for the online broadcast.

Ky Soklim: The pandemic surely disrupts many work processes, however, through the conduct of this online informative exhibition, do you think it will provide more benefit toward the general public?

Chhay Visoth: Well, it is quite experimental. It is a new step to test. The pandemic has left us with a challenge to adopt to new ways in showing our works. Beyond this online exhibition, I and my team also plan to work on the potential of creating a “virtual tour” for the general public.

Ky Soklim: You mentioned that there will be around 40 sculptures within the museum which will be showcased in the online event. Proportionally, how many sculptures are inside the museum when compared to those 40 that will be put on the show?

Chhay Visoth: I do not know the exact total number of all sculptures inside the museum. However, I can say that those 40 or so sculptures which we will show represent less than 10 percent of the entire sculptures that are housed inside.

Ky Soklim: So how did the museum go about choosing the 40 or so?

Chhay Visoth: The first thing is that these 40 objects are considered to be fine sculptures. The second thing is the interesting history behind each of them—particularly the journey that took those objects from their original places to where they are now within the National Museum of Cambodia. Let me offer you an example. There is a sculpture of Preah Ream (Rama) from the temple of Phnom Da where its original shape was somehow changed. There was some additional concrete added to the sculpture. From the eyes of the experts, we have requested the local to bring this sculpture to the museum. However, it was not easy. There were controversies before we can bring it and housed it carefully inside the museum. Furthermore, the museum itself is also part of the showcase within this online event. The museum building is also a part of the historical monument. The colors and the shapes of it all represent cultural elements of the museum itself.

Ky Soklim: Within the 40 sculptures, are there any sculptures that are more than 1,000 years old?

Chhay Visoth: They all have very different times of origin. But yes, some of the sculptures have existed for more than 1,000 years since the time of the temple of Phnom Da in Takeo Province. 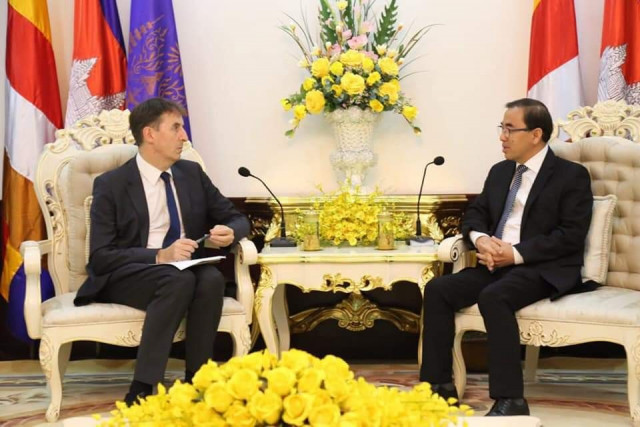