Photojournalists in Cambodia: Distilling History Down to a Single Image

Few photojournalists remain in Cambodia, but even fewer are women—Hean Socheata sat down with Cambodianess to detail the value of photojournalism as a powerful art of storytelling and perception shifting

Sao Phal Niseiy: First and foremost, can you share with us why you chose to go into this field?

Hean Socheata: It was July, eight years ago, that marked the first time I went into the field as a journalism intern, photographing the historical events in political chapters—the return of the former opposition leaders, election campaigns and election days, followed by the protest afterwards. I was a little girl with a very basic camera, which was a gift from my mum as a second-year journalism student at college, I joined the sea of people and was unsure what I should do out there.

Just to give a bit of background, some people knew that they wanted to be a journalist from a young age. I’m not one of them. I actually hated journalists when I was young because I had seen my profession being portrayed on television mostly as either parasites or tabloid journalists that only follow celebrities. The shift of my perception was unexpected when I started my internship with VOA Khmer back then in 2013, when Cambodia was in the middle of the national election. As a newbie in this profession, to witness the changes of one’s society with excitement was a remarkable experience. It was when I was exposed to the practice of real journalism—my journey began from there.

Hean Socheata: Show up and get the great shots—it’s an essential ingredient to enhance news stories. I guess what I love about this profession is the opportunities to access to and capture top leaders in the country and the world, people who make an impact on society, but also ordinary people who are reflections of Cambodian life and stories. Being a photojournalist, it is not just about capturing the moments, events or people; I actually take part in recording the first rough draft of history.

Sao Phal Niseiy: In Cambodia there are very few female photojournalists, why do you think this is? And from your perspective, why other young woman should consider this career?

Hean Socheata: I think there’s a lack of role models that women could feel they relate to or who show other young women that they actually could pursue any of their desired professions. Also, the negative public perception of journalism in Cambodia: risky, dangerous, and unconscious biases like the job is inappropriate for women or underestimating women’s quality work. What people do not discuss is how important the job is for society and how the engagement of women in this profession could improve or contribute to gender equality.

I think to have more women in photojournalism is important because gendered perspectives matters. Society has been long introduced unconscious biases social perception through men’s lens. Women and men have different approaches to getting work done and different ways to perceive the subject. If we want to navigate the balance and unbiases perspective for a fairer and more equitable society, for all of us, we need gender diversity in this field to tell the stories.

Sao Phal Niseiy: Have you got enough recognition in the way that you deserve to as one of a few female photojournalists in Cambodia?

Hean Socheata: The ‘female’ label isn’t something at the top of my mind—I focus more on my vision and channel my energy into the act of doing the work. In fact, I don’t expect people to recognize me as a ‘female’ journalist. There are other combinations that come into play, as for any human being doing a job. I would be more appreciative if people could look beyond my gender and see my capacity, quality work, intelligence, compassion, and sense of purpose, choosing to go for this profession to serve the public curiosity above all else. At least, I help set an example for other Cambodian women to pursue this career. What I am trying to communicate with young girls is, “Look! You can choose this profession too!”

Sao Phal Niseiy: People regard photojournalism as one of the most powerful forms of journalism as it not only tells a story but also shapes people’s perceptions. Do you agree with this statement?

Hean Socheata: Photojournalism is a challenging, thrilling, yet rewarding profession. I can practice both ‘photography’ and ‘journalism’ skills. In this job, we freeze a moment in real-time and real scenes with a responsibility to tell the truth and try to make the balance of the moment, action and emotions in a shot. Be there, witness historical events, and use our weapon—the camera—to tell visual stories with enough context and accuracy. Photojournalism captures readers’ and viewers’ attention to witness the situations and what is happening through the lens of the photographer.

Unlike other forms of journalism, the visual content—image—communicates with audiences across language and culture. A single photo could tell how much society has changed at a glance—it is powerful.

Sao Phal Niseiy: If I ask you to share your experience, do you think anyone can be a photojournalist? And what does it take to be one of them?

Hean Socheata: No-one is born or designated to be a photojournalist, I believe. It is a skill that we can learn and improve throughout the working process. With a ‘can do’ and ‘open-minded’ attitude, one can become a photojournalist. I remember the first time I was in the field, I would take hundreds of random shots, concerned that none of my photos would be picked or published.

When I first started this job, I observed how other senior photojournalists do their job: the angles they stand, the lens they used, their photography settings, and how they frame their shots. When I came back to the office, I discussed and sought feedback from my colleagues to select the great shots among all photos I have taken. The next morning, I would always check out the newspaper and other news outlets to see their choice in photo selections for publication, particularly the front page’s major stories. As time passed by, my skills improved. So my advice is that if young women want to be in this profession, don’t fight against the battle that not even exist yet. Don’t overcompensate ‘I can’t do it’ mindset.

Sao Phal Niseiy: It takes courage and confidence to get out and take pictures of people and places, and sometimes we encounter difficult circumstances. As a female photojournalist, do you think this kind of confidence can grow over time or how could you deal with it?

Hean Socheata: I think any professions comes with both pros and cons. The same goes for photojournalism. As I mentioned, there are benefits to being a photographer who happens to be a woman. For example, we have more patience to connect and build trust with protagonists, set an example for the younger generation and contribute to introducing a more balanced and unbiased perception. Also, there are the downsides: to set foot in dangerous and unpredictable situations and dealing with stereotypes and underestimation.

To me, the contribution and purpose of telling the truth from a woman’s perspective are way more important than the challenges and competitive pressure I have to handle while doing my work. This kind of confidence and courage can grow over time but not without the support from colleagues and surrounding people. I can say I may have a little fear for this chosen profession. But also, the same ‘little fear’ triggers my sense of precaution while doing my jobs. Well, I know society is supposed to be a place where everyone feels safe doing their work—no matter who they are. 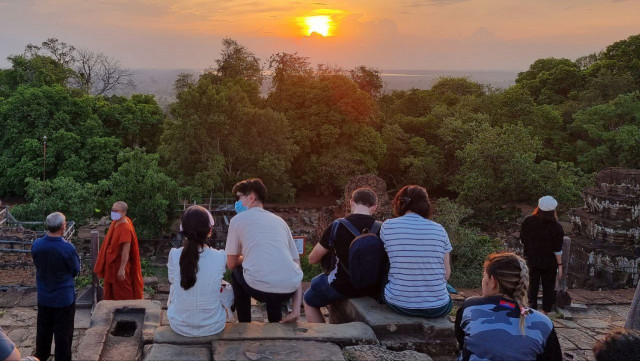 As Many as 2 Million International Tourists Expected in Camb...