Police officers and security guards on Nov. 26 prevent a supporter from standing in front of the Phnom Penh Municipal Court. Photo: Thmey Thmey

People were barred from gathering or standing near the building.

PHNOM PENH--The Phnom Penh police force tightened security in front of the Phnom Penh Municipal Court on Thursday morning (Nov. 26) as a court hearing was about to be conducted in the case of 150 former Cambodia National Rescue Party (CNRP) officials and activists charged with conspiracy and incitement to commit a crime.

Police officers prevented people from rallying or standing in front of the court building in support the defendants, blocking them from reaching the building.

Sam Sokong, who is one of the defense lawyers, said that 130 of the defendants were to be in court on Thursday morning.

Rhona Smith, the United Nations (UN) special rapporteur on the situation of human rights in Cambodia,  on Nov. 25 expressed serious concerns about the imminent mass trial of individuals associated with the CNRP—the opposition party that was dissolved by the Supreme Court in November 2017.

“The mass trials of CNRP activists appear to be politically motivated, lacking clear legal grounds and constitute a serious violation of the due process rights, firmly established by international human rights law,” Smith said according to a UN Human Rights press release, adding that such judicial proceedings appeared to be part of a strategy to intimidate and discredit opponents of the government.

“Every person must have the right to adequate time and facilities to prepare his or her case,” she said.

Since June 2019, more than 150 people associated with CNRP have been arrested and detained, with most of them facing charges of plotting and incitement, Smith said. “Civic and democratic space in Cambodia has continued to shrink and there remains little evidence of political rapprochement and reconciliation.

“I call on the authorities to open up civic space, protect and promote fundamental freedoms, including the rights to assembly and of expression, and to ensure the right to a fair trial for all, as guaranteed by international human rights norms and standards and Cambodian laws,” Smith said.

Her statement followed comments made by Prime Minister Hun Sen earlier in the day on Nov. 25 to the effect that some NGOs and their attorneys were inciting people to protest.

Speaking during a meeting with government lawyers and the Samdech Techo Volunteer Lawyers Group at the Peace Palace, he said that "[s]ome organizations and some lawyers also use every opportunity to incite people to protest—do not think that the government does not know about that.”

Hun Sen added that NGOs and lawyers should provide legal assistance and protection for people, but not to encourage them to protest. 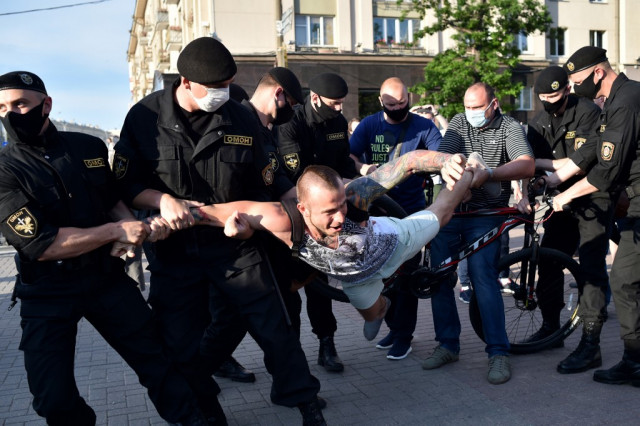