The youth activist group Khmer Thavrak on Aug. 25 stand in front of the Ministry of Women’s Affairs. Photo: Khmer Thavrak

PHNOM PENH — The youth activist group Khmer Thavrak on Aug. 25 burned a petition its members had submitted to the Ministry of Women’s Affairs more than four months ago to express its members’ loss of confidence that the ministry will take action to address the violence and harassment of which women employees on strike have been victim during the ongoing labor conflict at the NagaWorld casino in Phnom Penh.

The burning of the document took place in the evening, members of the group having gathered at the ministry earlier that day to follow up on their petition and submit a second one in which they were asking to meet with the minister, Dr. Ing Kantha Phavi.

The ministry must pay attention to the concerns of the women strikers and not let violence happen over and over again, Samnang said. “Until now, there has been no solution, so this means that the ministry does not have the ability to deal with this issue,” he added.

Following the burning of the petition, which was reported in the media, the ministry on Aug. 26 issued a statement, denying the accusations made by Khmer Thavrak and saying that the group meant to slander the ministry, and that this was greatly affecting the ministry’s reputation.

On April 4, 2022, the group Khmer Thavrak had filed a petition with the Ministry of Women’s Affairs and the Ministry of Interior, asking to find a legal solution to the violence and harassment that, the group claimed, the Cambodian authorities had used against the NagaWorld women strikers.

Former NagaWorld employees have been on strike since Dec. 2021 over the dismissal of more than 1,300 employees on the grounds that the company had financially suffered during the COVID-19 outbreak. By August 2022, more than half of those who had been laid off had agreed to accept compensation and stop striking, while more than 150 remained on strike.

Following the incident, 38 unions and civil society organizations, in a joint statement released on Aug. 15, denounced the brutal crackdown carried out by the government to stop employees from striking near the casino. They should be permitted to demonstrate peacefully in front of the business, as stated in the country’s labor law, they wrote.

In its petition to the Ministry of Women's Affairs in April 2022, the group Khmer Thavrak had asked the Ministry of Women's Affairs to find a legal solution regarding the authorities’ violence committed against NagaWorld women strikers. According to the petition, the authorities had used inappropriate words toward the strikers, threatened them, used violence and also grabbed their chests while forcing them into buses during clashes in February 2022.

“What we’re disappointed about is that, for four months, [the Ministry of Women’s Affairs] has not followed up [the case],” Samnang said. “We believe that there is no measure, and the ministry will stall it and has no responses.”

During the interview, Samnang made a request to Prime Minister Hun Sen, asking him to look into the matter, answer people’s concerns as well as review ministers and officials’ ability and willingness to serve Cambodia’s people. “The minister of women’s affairs should be dismissed,” he said.

In response to the Khmer Thavrak group’s claims, Sar Sinet, deputy director in charge of Legal Protection at the Ministry of Women’s Affairs’ General Department of Social Development, said that the ministry’s role was to formulate policies to respond to gender equality and assure women’s empowerment to ensure that they receive equal opportunities. The ministry does not know work alone, she said during an interview on Aug. 26. 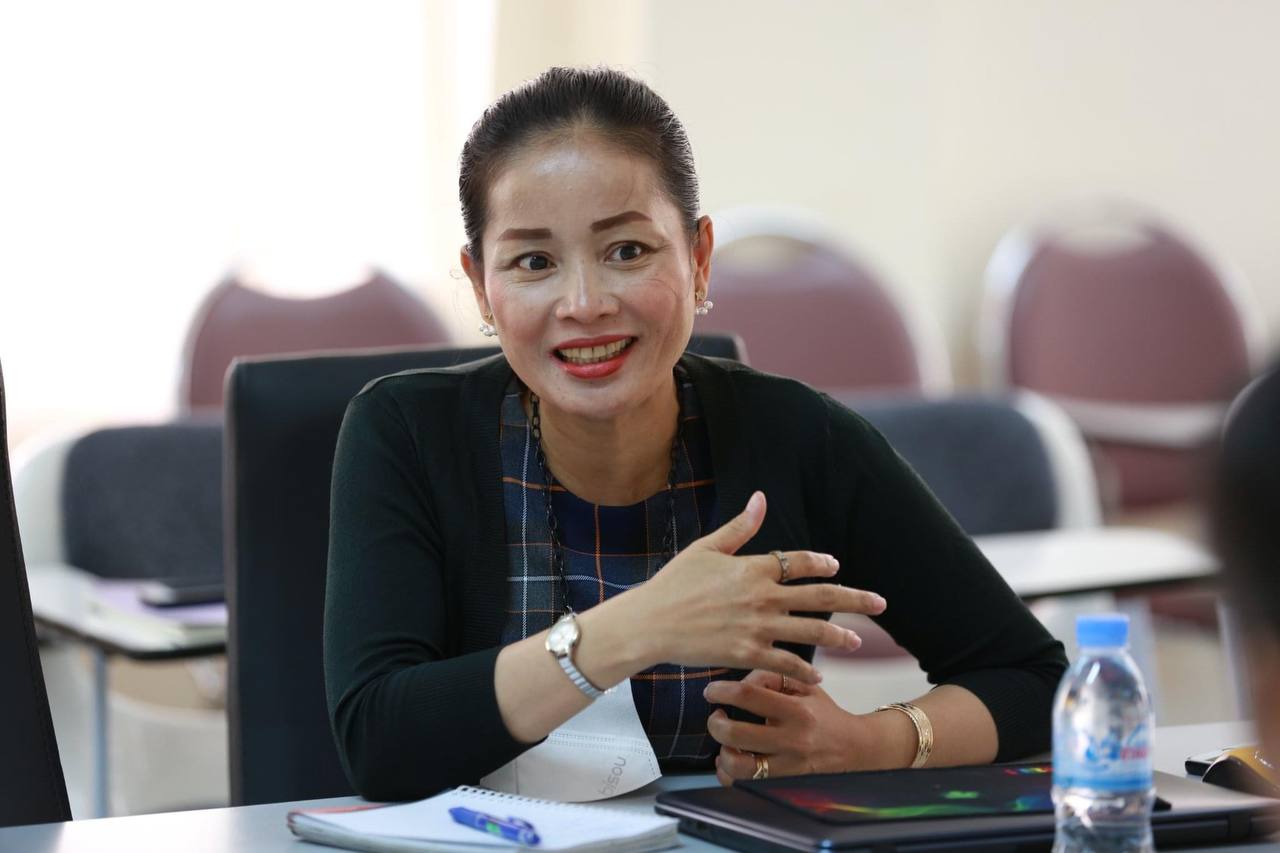 Sar Sinet, deputy director in charge of Legal Protection at the Ministry of Women’s Affairs’ General Department of Social Development, said that the ministry’s role was to formulate policies to respond to gender equality and assure women’s empowerment to ensure that they receive equal opportunities. Photo: Ministry of Women's Affairs

Regarding domestic violence or the violation of women’s rights, the ministry directly offers mental, legal and mediation services to the victims, while also respecting the victims’ privacy, Sinet explained. “It’s our mission, but the ministry also has another mission, which is to monitor and urge the relevant stakeholders to expedite measures or to solve any problem.

“Regarding the NagaWorld problem, the relevant ministries have received the petition,” she said, regarding the Khmer Thavrak group’s petition. “But the Ministry of Women's Affairs has the role of requesting or urging the relevant institutions to expedite the procedure and…of monitoring the status of the case.”

Asked about Svay Samnang of Khmer Thavrak saying that the ministry was tackling the issues regarding the NagaWorld women workers with partisanship and the intention of discriminating against them, Sar Sinet responded that the working group at the ministry addresses women’s issues based on general principles and that not all issues have to be directly handled by the ministry.

“As for the provision of services, we do not discriminate against​ any groups,” Sinet said. “We need to make it clear that they are the victims of domestic violence and abuse…Moreover, we do not judge the victims. We respect their privacy and do not disclose their information during the meeting. We provide services to people from all walks of life. Lastly, we also make safety plans for them.”

Regarding discrimination, Sinet said that, if the ministry was discriminating against some women, its staff would not have lawyers for underprivileged girls and women who are experiencing domestic violence. Stressing that the ministry always aims to provide justice for the victims, she said, “[t]his is our work, and that [the statement of Khmer Thavrak] was just their saying this.”

On Aug. 23, the Ministry of Women's Affairs had issued a press release, urging the media to handle their reporting on violence against women in a professional manner, saying that the ministry had found out that only a handful of them reported facts on those cases correctly.

Chak Sopheap, director of the Cambodian Center for Human Rights (CCHR), said that there does not seem to be measured from the government to halt violence or rights violations such as the right to assembly. Instead, the government defends the authorities who commit violence, which is contrary to their responsibilities as well as to national and international laws that aim to address and eliminate violence against women.

“It is seen as a continuation of the culture of violence and impunity,” she said during an interview on Aug. 26. “We, the civil society group, want to see the ministry set up a specific action toward this issue [of violence on NagaWorld workers], but the measures involve all relevant ministries and institutions.” Cambodia’s Real Estate Sector Reeling in the Wake of COVID-1...