Senior US State Department officials on Sept. 15 urged the Cambodian government to immediately release of a series of activists who have been detained for their involvement in peaceful protests.

Following outcries from a number of international observers, Assistant Secretary of State for Democracy Robert A. Destro has appealed to the Cambodian government on behalf of the growing number of activists being detained.

PHNOM PENH—Senior US State Department officials on Sept. 15 urged the Cambodian government to immediately release of a series of activists who have been detained for their involvement in peaceful protests. Officials said that the US is deeply concerned about the arrests and wellbeing of those people.

Assistant Secretary of State for Democracy Robert A. Destro said that the rights to free expression and association are enshrined in the Cambodian Constitution.

“The US is deeply concerned about arrests of those exercising these freedoms and we urge the government to immediately release them, and allow all voices to be heard,” said Destro over his official Twitter account.

This public condemnation came after Touch Vibol, executive president of the Student Movement for Democracy submitted three separate letters to US Secretary of State Mike Pompeo, US House of Representative Alan Lowenthal and Senator Linsey Graham, requesting the US to intervene in securing the release of the jailed activists.

All activists who have been detained had voiced concerns over issues the Cambodian government deems sensitive; namely the Vietnamese border, the loss of land there and the deteriorating human rights situation.

The Student Movement for Democracy said that Cambodian people’s hearts see the US as a liberator and argued that the Cambodian people deserve the attention of the international community, which respects its commitment under the 1991 Paris Peace Accords.

“Cambodian people deserve justice and accountability for the Hun Sen regime’s past and recent crimes,” the petition read. “They deserve real democracy, not merely a façade.”

Cambodians who are living in the US have announced that they will protest again on Sept. 28 in front of the US State Department and the Cambodian Embassy in Washington, DC, to demand the release of prisoners of conscience.

On Sept. 11, the United Nations’ Spokesperson of the High Commissioner for Human Rights (OHCHR) issued a statement calling on the Cambodian government to put an end to measures taken against human rights and environmental activists over the last few months.

The Cambodian government’s response remained dismissive, claiming that the peaceful protests that have flared up pose a threat to public order.

Phay Siphan, spokesperson for the Cambodian government said that the OHCHR spokesperson’s request for the government to release those in jail and change its policy toward human rights was just an opinion being voiced.

Ministry of Justice spokesman Chin Malin claimed that the rallies were “anarchic” and that international pressure on Cambodian state institutions would not protect the defendants.

He urged those organizations to work through judicial proceedings to defend people legally, by presenting strong testimony and evidence in acquittal to the court, which are the only legitimate means of defending defendants in a democratic society governed by the rule of law.

“All civil society organizations, both national and international, operating in Cambodia must adhere to the sovereignty and national laws of Cambodia in force, in particular the Law on Associations and Non-Governmental Organizations,” he said.

Cambodia’s courts are widely recognized as failing to meet international standards of independence, with much of the judiciary linked directly to Prime Minister Hun Sen’s ruling Cambodian People’s Party. 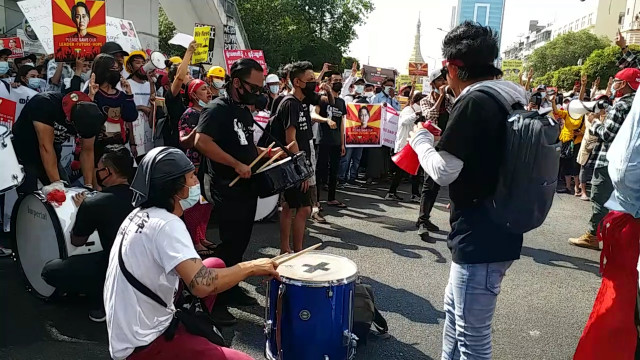 In Myanmar, Music is the Voice of Protest